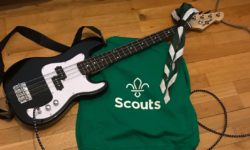 ‘Why would I want to learn that?’

Like most parents, we’ve finally arrived at the crunch point. Do we invest in a games console for our eleven year old son, and resign ourselves to countless lost hours, or hold out at the risk of letting him flounder amongst his peers?

My son is already a Scout. He loves being outdoors, and returns from his meeting each week smelling of wood smoke, streaked with mud or ketchup (delete as applicable), and tired to the point of sleep. At Scouts he’s learnt to code, met guide dogs, sung in elderly residents’ homes, tried archery, built rockets, and can lash together a raft from ropes and barrels as easily as you or I might tie our shoelaces. It’s taught him countless skills, and has helped him focus and become a better listener.

Inspired by his Scouts antics, almost every weekend he cycles off to the country park with his similarly wild friend to spend the afternoon den-building, tree-climbing and gadget-making. It’s a sort of miraculous Huckleberry Finn-like, or Swallows and Amazons-type, existence that would be the envy of Peter Pan. I can’t bear the thought that this wide-eyed freedom could end with the arrival of an innocent-looking plastic cube.

Christmas is coming up and the decision looms over us. Almost everyone in his class, I’m told, is either getting PS4 or Nintendo Switch, or an upgrade to an upgrade. Is this the moment we just give in, or do I make the case for something else that can delay the inevitable for just a little while longer?

But there’s something else worrying me. My son is a certified daydreamer — not yet losing himself in books, prone to short lived enthusiasms for drawing or making things, and often finding himself at a loose end. It’s quite common for me to get back from work to find him draped like a cat across the back of the armchair, watching the TV upside down, wearing a look of abject boredom. Despite all his creativity and energy, he hasn’t yet found the thing that defines him.

Another of his friends (also a Scout and probably his BFF) has just moved to Germany with his family. He knew this was coming and we were worried about what kind of effect it might have on him. They’ve known each other since they were toddlers. Although he won’t talk about it, I know that he’s become more insular and less sure of himself since their separation. And he’s still prone to lose his temper if he can’t express himself.

My remedy, and delaying gambit, has four strings, a length of cable and an amplifier. I’ve just suggested that my son learns bass guitar for his Hobbies Activity Badge. He gives me a look of deep suspicion.

‘Are you just using me to get one for yourself? Mum won’t let you buy one so you’re using me as a way to get one.’

Maybe there’s a grain of truth in this. More than a grain, perhaps. I’m a rudimentary guitar player. I had some lessons when I was younger and know the refuge a musical instrument can be — how it introduced me to new people and taught me to be sociable. I have a radical suggestion. We should learn the bass together.

‘It has four strings,’ I reason, ‘so it’s two thirds easier than learning guitar!’ He stares at me blankly.

The benefits of playing an instrument are well known. Not only does it give you a sense of achievement, it improves patience, improves memory, inspires creativity and instils discipline. I think of the many times he’s stomped off to his bedroom. So much better that he can storm off, plug in, and give his pent-up energy a creative outlet.

He’s already tried learning an instrument with the school. His euphonium came home exactly twice, and no amount of cajoling or bribery could persuade him to lift the lid. My son’s musical career it seemed had ended before it began.

It’s Christmas morning and wrapping the bass in the small hours used up almost an entire roll of wrapping paper. Not very environmentally friendly. At first, seeing the unmistakable shape, he’s reluctant to unwrap it, heading instead for a box of LEGO. All day it stands in the corner.

Eventually, sometime after the Queen’s Speech, we get him tuned up and I teach him one or two simple things.

‘Hang on,’ he says. ‘Is this Paul McCartney?’ He narrows his eyes. ‘What’s this called?’

‘Well that says it all!’ He flings the bass onto his bed and marches off down the corridor. ‘I don’t even want to do this!’ he calls back. ‘This isn’t about me, it’s about you! You’re just teaching me things you want to learn!’

Two days later, he approaches me sheepishly. ‘Okay, there’s something I want to learn.’ He’s just been to see Bohemian Rhapsody and is inspired by the scene in which John Deakin ends an argument between his bandmates by playing the bassline: Another One Bites the Dust. ‘I’ve worked out the first bit,’ he tells me quietly, ‘but I need your help.’

Just asking for help is a great thing in itself. Soon we’re both on YouTube watching and re-watching a video to get the hang of it. The first part is straightforward enough but there’s a funky bit in the middle that eludes us both.

‘How can I do that? How is that even possible?’

‘You don’t have to play it that fast to begin with.’

Eventually the penny drops and I manage it. He watches me like a hawk, then seizes back the bass. Within minutes he’s playing it perfectly.

I make another attempt at teaching him some McCartney bass lines.

‘What has Paul McCartney ever done anyway?’ It’s like a scene from The Life of Brian.

‘Okay, okay. Well maybe. Teach me something then.’ Soon we’re thundering through Back in the USSR.

Later we’re working on a U2 song, Red Flag Day. I’ve showed him the bass line a couple of times and he seems to have the hang of it, his small hand like a spider scuttling across the frets.

‘Dad, don’t take this the wrong way, but you’re not Bono.’ He’s genuinely trying not to hurt my feelings. ‘I think it would be better if you didn’t sing.’ Despite some dented pride, I take this in good humour.

He has developed some bad habits, relying on his two strongest fingers to handle most of the chores. Consequently, his hands are flying up and down the strings. I suggest that he might want to try a different way of playing the notes allocating one finger for each fret.

After some three or four attempts at a difficult run, he takes his hands off the strings. ‘That’s it,’ he says. ‘Send it back.’ I tell them we’re beyond the point of no return.

I get back from work and there’s the sound of a bass reverberating through the floorboards. He’s found something he can work away at, improve day by day. Just the sound of it fills my heart with joy, not that I was the one to introduce him to it, but that he’s found a contentment he didn’t have before.

I’ve barely closed the door behind me when he comes flying down stairs. ‘You’ve got to come up!’, he instructs.

He flies back into his room, straps on his bass and starts cranking out the riff to Gorrillaz Feel Good Inc., an insistent, hypnotic bassline. It’s not something I’ve taught him and I’m incredibly impressed. He’s thinking independently, following his musical tastes. He FaceTimes his friend in Germany and plays him some of the things he’s learnt so far.

He returns beaming. ‘We’re going to start a band’, he informs me. ‘He’s learning guitar in Germany, I’m learning bass here, then we’re both going to move to Namibia when we’re older and start a band there.’

It’s April 2019. Four months on from the start of this new adventure. I feel closer to my son — learning together has been frustrating and rewarding in equal measure but incredibly bonding for us. He’s more focused, and his self-esteem has shot up. Most of all, he’s now proud to call himself a musician. He takes some videos he’s made of his bass playing to his leader and a notebook of the songs he’s learnt. He returns home with his Hobbies Badge. I suggest he sews this on himself…

‘Better things to do,’ he grins, and disappears upstairs. The walls begin to shake once again, and my wife and I exchange a look. What have we started?