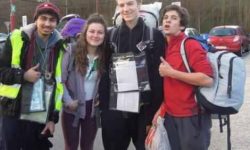 Last weekend Bilaal, Stephane, Anders, Lawrence, Daniel and I did our silver DofE hike. Bilaal, Stephane and I were doing the training and the other three were doing their actual Award.
The expedition consisted in walking 40km over two days with our backpacks containing all the cooking and sleeping equipment we needed for the duration of the weekend.
The weeks leading up to the hike we planned our routes, the food we were going to take and the accommodation. We also went over how to pack our rucksacks. I must admit the first time I packed my bag, I wasn’t quite sure how I would fit everything in. Of course, being a girl, I have some experience with putting the maximum into my suitcase but I could see that wasn’t going to happen this time! So, understandably, I was rather relieved when Nil gave us tips and sent us some really useful links on how to pack our bags!

The weekend was a first in many ways for me: I’d never done a hike longer than 10km, I’d never had to carry a 10kg rucksack on my back and I’d never set up a tent, let alone slept in one! Nevertheless, it only made me more motivated and excited to go on the expedition.

On Friday, we all met at the Ottignies station and took the train to Barvaux in Namur. From there we walked a short distance to the first campsite.
When we arrived, we put the tent up, Nil started a fire and we immediately got the food out. I had bought some really clever food packets. All we had to do was boil the water, pour it in the food bag, stir and then voila! I wasn’t quite sure what to expect but I was pleasantly surprised. I would definitely recommend them.
Once dinner was served we all gathered around the fire. Nil told us about his adventures and we got to learn a bit more about each other. It was great! 🙂

The plot we were camping on was situated right next to the river Ourthe so on Saturday morning I awoke to the sound of flowing water. I lay there for a bit, mentally preparing myself for the cold that awaited me outside my sleeping bag when I heard the first raindrops fall… I had second thoughts about leaving the warmth of my sleeping bag but I was rather hungry… So I got up and started cooking the bacon. Yes, bacon… Watching the rain fall on the pan while trying to fry it, I honestly thought I wasn’t going to get to eat it at all! That is until we saved it by putting it on the fire.
In retrospect, packing bacon probably wasn’t one of my wisest decisions but I can’t deny that it was a nice way to start the day… 😉
Once we had cleared everything up, packed our rucksacks and gone over our routes one last time, we set off in our individual groups.

Bilaal, Stephane and I marched ahead for the majority of the day making great time. We chatted but also had our silent moments. It was quite liberating to walk in the countryside. Everything was going smoothly up until the end of the afternoon… We were following our route when we ran in to a slight problem; we had planned our route straight through a military zone! We realised we would have to make a considerable detour to get around the military area so in an effort to keep our morale up, we entered a serious battle of “eye spy with my little eye”. I can honestly say I have never laughed so much whilst playing this game!
I feel like I made some great friends on the journey. Anyhow, that’s what I kept in mind when we were still walking at 8pm, an hour’s walk away from the next campsite and called Nil for help. I was disappointed of course but I knew something even better had come out of the day; I am officially the best at eye spy! 😉

I was also extremely grateful when Nil told us our fellow Explorers had put up the tent since they had arrived on time. And when he announced there were hot showers at the campsite, I may have done a mental happy dance! There is nothing better than a nice hot shower after a day of walking!

As Saturday was Baden Powell’s birthday, we celebrated in the evening. We went all out with the celebrations; we lit a candle on some brownies and sang happy birthday around the campfire. It was another wonderful evening.

Sunday morning I was woken by Anders saying “Guys, we should have been up an hour ago!” Both teams were walking together on Sunday so we combined our two routes and took turns leading the group. Through all the groaning about sore feet and shoulders, I’d like to think we had just as much fun as Saturday! It was useful to learn from the more experienced explorers and to exchange tips on what to do and what not to do during the hike.
We arrived in good time at the Jemelle station and took the train back to Ottignies.

Altogether, I had a great time. Admittedly, I may have made some mistakes along the way but that’s all part of the training. I now know a little more about meal planning and I’ll definitely double check for military zones next time I plan a route.

I’m already looking forward to my actual expedition in a few weeks time!