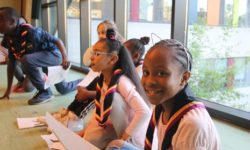 We’re proud to share our latest annual membership figures with you. They show that we’ve had another year of growth, including a marked rise in membership and a wave of new sections opening in areas of deprivation across the UK.

Since 2014, we’ve been focusing on bringing Scouts to some of the UK’s most disadvantaged communities: this is part of our strategy to ensure all of the UK’s young people have access to services that allow them to develop essential life skills. The new figures reveal that we’ve now opened 1,280 sections in areas of deprivation. This means that nearly 20,480 young people from the toughest to reach communities are now a part of the UK Scout movement.

To generate this growth, we’ve employed development officers to work in local communities, seeking out community leaders and meeting places, and setting up these new provisions. They then support the new sections for a few months to ensure they’re self-sustaining and can continue offering high quality youth work once the development team moves onto new challenges.

Linda Anneh-Bu, a Scout Leader from a group which started in 2018, said, ‘Scouting is a bit of lifeline to the community round here. It gives the young people really fun and exciting things to do and helps them develop skills that will help them in later life. I am proud to be part of the team that gives new opportunities to our young people.’

Despite this focused development work, the waiting list for those wanting to experience Scouts has also continued to grow, with more than 60,000 young people now wanting to join us in the UK.

Tim Kidd, our UK Chief Commissioner, said, ‘2018 has been another strong year for Scouts, as the movement continues to go from strength to strength in the UK. Scouts reaches the UK’s young people, giving them the types of skills that will help them to succeed in life, long after they’ve left us.

That’s why I’m particularly proud of the work we’ve done in communities across the UK that may not traditionally have access to Scouts. To be able to give close to 21,000 UK youth in areas of deprivation the chance to develop skills that will help them succeed in life is a real achievement, and is core to Scouts’ ongoing mission of skills for life.’

Bear Grylls, Chief Scout, was also thrilled to see the new figures. He said, ‘I’m so proud that Scouts continues to see so many young people andadult volunteers signing up to not only have fun, experience adventures but also learn skills for life. As an organisation, we want to make sure all of the UK’s young people have access to these opportunities, which is why it’s so important that we are seeing such strong growth for the movement in the most deprived areas of the UK.

But to do more, we need more volunteers! We still have more than 60,000 young people who want to join and gain new skills but are unable to do so. If you want to make a difference to the lives of young people, feel more motivated and confident and learn some new skills then please give Scouts a go.’

Examples of new provisions opened in areas of deprivation in key English regions:

Young people attending these Scout groups are drawn from the 10% most deprived wards in England.

In the last year, a new Scout Troop has been opened to cater for nine young people with more being recruited later this term. The Troop are supported by five adults.

The event is returning after a two-year break due to the pandemic, and will cause some minor traffic...

When this happens, it's usually because the owner only shared it with a small group of people, chang...