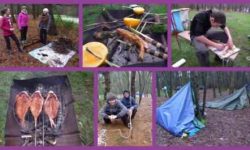 It was an amazing camp! The 10.5km hike there was banterful. Arriving at De Kluis Friday night was a relief that overjoyed me and the taste of the freeze dried food was ecstatic.

For those who enjoy the taste of oatmeal, Saturday morning was great, however those of us who feel it tastes repugnant; we had to force it down our throats which made me feel despair in the pit of my stomach (or maybe that was just the oatmeal). The gutting, the seasoning, the grilling and the eating of the red mullet fish all went smoothly and according to plan. So did the cooking of the rabbit for dinner. And may I add, they were surprisingly delicious!

Three new people joined our ever growing family of 1st Waterloo Explorers; Jose, Joseph and Ann, which made me feel pride for our group. All of them having been part in Scouting before were very familiar with the aspect of camping.
The sounds of banter, laughter and fire cracking filled the air on Saturday night. For those of us who stayed up later, we said goodbye to Amber and Bernard (those names being the ones we gave both of our fires).
Sunday morning I was delighted to hear there was no oatmeal, instead we made some omelettes in bags! And as everyone who has ever been on camp knows, as long as the food is hot and nutritious, it is about a stone’s throw away from a gourmet meal. Chicken for lunch, then flag down, then another 10.5km hike back. A hike in which we thought the banter would dry up, but instead just multiplied. In its totality, the weekend Winter/Survival Camp went fantastically!

Thanks to everyone present, especially the leaders, for another amazing experience as a Scout! One I will not forget anytime soon.

PS: the words I have used to describe the various activities over the weekend were taken straight from a sheet of paper given to us by the King of Banter himself, Nil.