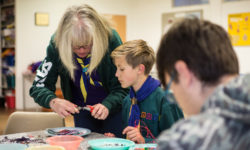 As you’ll have seen over the last few weeks we have been working hard to recruit a successor to Peter Dawes who has been Area Commissioner for British Scouting Overseas since it’s inception some 7 years ago, and for British Groups Abroad prior to that.

We’re delighted to share that Nathan Prince has been appointed by Callum Kaye, International Commissioner to the role of Area Commissioner from September.   Nathan will be working closely with Peter through the summer.

Nathan first joined Scouting as a Cub Scout in 1977 and latterly as an adult Volunteer in the mid 90s, initially on Ascension island and latterly in Oman, Gloucestershire and London.   In BSO, Nathan has been active as Deputy Area Commissioner, leading the now annual BSO Jamboree programme, with plans for the biggest ever BSO camp next year at WINGS.

Outside Scouting Nathan served with the Royal Navy, before becoming a Civil Servant and is married to his wife Debbie, with whom he has a daughter Charlotte.

Speaking on his appointment, Nathan said “Our District and Area support teams do an amazing job supporting our front-end volunteers who deliver brilliant and fantastic programmes across the four Districts. I am keen that we maintain and build even better support to increase our #skillsforlife impact by focussing on our strategy of growth, inclusivity, youth shaped and community impact. Under Peter’s tenure, BSO has seen tremendous growth and success. He is a very hard act to follow, but I promise you that I will work tirelessly to support you and your teams in whatever part of BSO you’re currently volunteering in and help you to build on the fantastic work you’ve already achieved.”

In appointing Nathan, Callum would like to firstly thank Peter for all he has done over the years in BSO. With his passion and expertise, he has done a fantastic job of bringing BSO together, making it the growing and successful Area it is today. The Area is in an exciting stage currently and Nathan brings with him an immense amount of experience which will be invaluable to the Area. I’m sure in his hands BSO will continue to offer it’s members the best Scouting provision possible, wherever they are in the world.

Our outgoing Area Commissioner Peter adds his congratulations to Nathan on his appointment. I am delighted that the BSO journey will be taken forward under his enthusiastic and knowledgeable leadership and I am confident that BSO will go from strength to strength.

We prepare young people with skills for life

The event is returning after a two-year break due to the pandemic, and will cause some minor traffic...
View on Facebook
· Share

We use cookies to ensure that we give you the best experience on our website. If you continue to use this site we will assume that you are happy with it.Ok