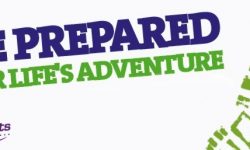 Scout Ambassador Helen Glover shares her thoughts on achieving your goals, developing skills for life and the power of volunteering

Hi Helen. Thanks so much for chatting to us today. As a two-time Olympic champion who’s been ranked the number one female rower in the world since 2015, with a number of world records under your belt, you must feel very proud. Having achieved so much already, how do you keep yourself motivated?

I think the thing with motivation is that I’m naturally a motivated person anyway. So if I set myself a target I’ll be pretty motivated to achieve it. I think shortly after the London Olympics, after winning the first gold, I immediately wanted to back it up by winning another one. So almost immediately that motivation was there. Yeah I think for me it’s about having targets, even more than about winning something it’s about having something to work towards.

You’ve recently become an ambassador for the Scouts, which makes complete sense, as you’re an obvious inspiration to young people. It would be great to get your thoughts on how all sorts of people can step up and be a source of support and encouragement for young people. Why would you encourage people to volunteer?

Aside from what I’ve been doing in rowing, I was one of the first female Scouts in my Scout Troop back in Cornwall and it was a seriously big part of growing up. My brothers and both my sisters and myself, all went to Scouts and learnt a lot. And two of the most influential people in my whole childhood were my Scout leaders, who I’m still in touch with now. They were both at my wedding; they actually provided tents for the wedding guests to stay in. Scouting has been a really big part of my life and you know if these two people hadn’t volunteered I wouldn’t have had that. And it wasn’t just me they made a difference to; it was everybody who came through Scouts. Whether people go into careers in the outdoors or in an office, I think you learn so many skills through Scouting. It’s just really important that people get involved and get volunteering.